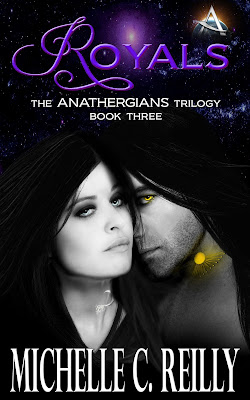 The highly anticipated last book in the Anathergians Trilogy is here at long last!
Together They Can Prevent the Destruction of the World

Variants, humans whose altered DNA turn them into blood ravaging killers, are attacking en masse around the world. Their leader, Travik, is gathering a force from space to kill every last human.

Auden, king of the Anathergians, has the fate of the world in his hands. His hold is slipping as the threats multiply each day.

Then there’s Auden’s Lifemate, Leah, whom he loves above all others. He struggles to do what he can to ensure her safety while also protecting her from herself.

But Leah wants nothing more than to use her newfound Anathergian strength, along with her witch powers, to remove the threat of the Variants and their leader. It doesn’t matter that the villain is her father. She’s had enough of his continual harassment and attacks, especially to those she loves. She will do whatever it takes, including lies and deception, to end this threat.

Travik, one of the last living Anathergian royals, wants to take Auden’s place with his daughter at his side. He will destroy everything, including every precious life on this world, to get what he wants, no matter the cost. First, however, he must convince Leah to agree with his way of thinking. And if she doesn’t… Well, he has no problem hurting, maiming, or killing those she cares for.

Michelle C. Reilly is a science fiction romance writer. She's a single mom of two wonderful boys. She spent ten years in the U.S. Navy as a Hospital Corpsman Preventive Medicine Technician, which meant she was actually attached to or stationed with the U.S. Marine Corps. She has a Masters in Science in Public Health, but she is generally an IT geek and a geek of many other things as well. She currently resides in Las Vegas, NV, with her two cats, Meowdy and Moose, and her dog, Katie aka "The Old Lady."

Make sure to visit her website www.michellecreilly.com for more information about her and her upcoming books.

Feel free to visit, ask her questions, and hang out with her on Facebook at www.facebook.com/michellecorareilly

Thank you for posting! I really appreciate it! ~Michelle C. Reilly

I so look forward to reading your new book.